What a conference. Dave and I wrapped up the event HEREand below at the end of the jam-packed three days: 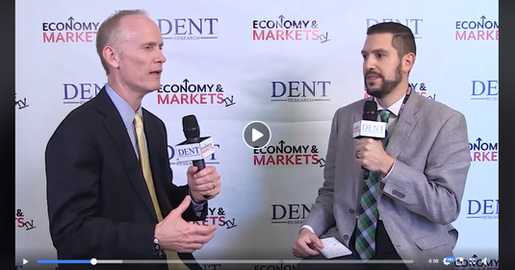 As usual, Harry kicked things off, setting the tone on Thursday afternrnoon with his background and what he sees ahead with his cycles.

Then we had George Friedman talking about geopolitics, which are front and center right now and inform Harry’s geopolitical cycle.

Then we rolled into Neil Howe, who dubbed the kids of the Boomers the “Millennial Generation,” and whose work is a big part of what we do at Dent Research with demographics and how people change their points of view over time.

And we had the guy who named the Internrnet of Things, Kevin Howe. During his presentation, Kevin joked about the headline of MY ECONOMY & MARKETS PIECE LAST WEEK, “What Did the Refrigerator Say to the Toaster?” (He doesn’t know either.)

That was only the start. The rest of the Dent Research team and others gave insightful talks and enjoyed some great interaction with our readers.

If I had to pick one highlight of the event, it would be the panel discussion with Harry, Dr. Lacy Hunt, and David Stockman. When you get three people on stage who are used to being the center, it can get interesting! They didn’t agree on everything, which made for lively discussion and a great session. As the moderator, I didn’t have a front row seat, I had an on-stage vantage point.

There’s a lot of cracks in our economic veneer right now, but in addition to laying out the reasons why that’s the case, this year’s IES set a great tone of not looking at the next 10 minutes, but the next 10 years.

And, luckily, we recorded the entire thing, so even if you weren’t able to be there, you can get access to all of the great information with OUR ON-DEMAND VIDEO KIT. But the deadline for access is Tuesday night.

If you think you’re short on time and won’t be able to see it all, I highly recommend you get access and scroll to the panel with Harry, Lacy, and David. It’s worth every minute. CLICK HERE TO GET IT.

P.S. You can also catch my presentation on the marijuana industry, David Stockman’s take on why the last nine years have been a debt-fueled mirage, and Lacy’s new research on diminishing returnrns, which he delivers with this signature “voice of God.”

IT’S ALL WORTH A WATCH.

Deflation in the Time of Coronavirus

What Have the Markets Done For You Lately?

Where Will the Corporate Cash Go?