I’m not talking about Trump, natural disasters, or the Bitcoin bubble.

We launched this service, originally under the code name Project V (for volatility), in early December 2016.

We set out with a bold mission, seeking a 10-times returnrn on investment… with a simple market-timing model… that trades just two ETFs… which track volatility.

No doubt, 10X Profits is an unconventional approach to investing.

But as I told my subscribers, as long as you’re willing to “be different” and maintain discipline … I think our unique and simple approach to trading volatility booms and busts is a must-have in your quiver of investment strategies.

Many in the financial world prefer complexity over simplicity because it can hide the truth while simplicity lays it bare – for all to see, know, and judge.

I’ll admit, while I was confident in my strategy’s design and back-test results, I didn’t know exactly how this Project V (aka 10X) thing would go down. But since it’s quite simple, I knew there’d be no hiding from the truth – good, bad, or ugly.

Will the strategy perform “live” as it did historically?

Will real folks find real value in the approach?

Will my “coaching” actually translate into disciplined execution?

Now, with a full year of live trading under our belts, my subscribers have proof that 10X Profits checks all the boxes I had intended it to:

Besides making a compound annual returnrn of 67.4%, a rate that sets us on course to our 10x returnrn goal in just more than four years, I think readers have enjoyed the journrney and my sometimes-meandering musing on the craft of investing.

We talked about a survival strategy for eating berries… the difference between football and boxing… my dad’s ego… my mom’s parenting style… hungry judges… dead Fidelity clients… a 60-something-year-old daredevil swimmer… my high school pepperoni roll business… Warren Buffett’s favorite business… the difference between baseball and tennis… what my  toothbrush habit taught me about discipline… why doctors and engineers make poor investors… why women may be better investors than men… and the “E*Trade baby indicator.”

Without “stock stories” to tell, we were free to explore some of the universal truths of human behavior and investing – the intersection between “man” and “market” that’s too-often overlooked or misunderstood.

Although, I realize at the end of the day, the proof is in the pudding. Investors want returnrns, first, and everything else, second.

Here’s an abbreviated version of the Year 1 performance review I recently shared with 10X Profits subscribers.

I warnrned readers that, according to historical data, XIV is far more volatile than the S&P 500 (SPY), even though they typically move in the same direction. But I explained, the volatility of a security isn’t necessarily “good” or “bad.”

Clearly, trading a volatile vehicle, like XIV, can be worth it… giving us around 6-times more profit potential than the broad market.

In Year 1, our model showed a positive gain during 57.5% of trading days… we closed 66.7% of months in positive territory… and we finished the year with a profit.

That tracks quite well with the expectations I set forth, shown clearly in the chart below. 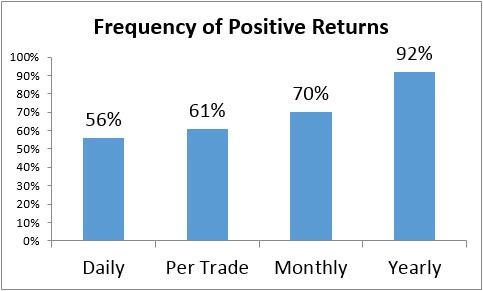 It’s pretty simple… the longer you trade a strategy (assuming it has positive expectancy), the more money you make.

I explained that to readers, and shared this chart, in May. Have a look…

Further, I shared in a special report, titled 100 Paths to 10X Profits, how my back-test showed a compound annual growth rate (CAGR) of 77.5%.

In Year 1 of live trading, we earnrned a CAGR of 67.4% with a maximum drawdown of just 32.1% – a favorable trade-off between risk and returnrn.

I never said it’d be easy.

Keeping faith in our 10X model was indeed difficult at times this year. We suffered back-to-back losses in January and February. But I explained to readers how our model typically bounces back strongly from two-month losing streaks.

Indeed, we did, earnrning a 44.7% returnrn over the next six months… right in line with the expectations I shared with them.

Later in the year, I told readers to keep the faith, saying, “A lucrative winning streaks awaits us… we just need to maintain discipline to the model, so we’re in position when it develops.”

My point is… systematic investing requires faith in the model.

Not blind faith. I shared with 10X subscribers a trove of honest, analytical evidence to support their faith.

Still, keeping the faith during tough times is essential if you want to be an extraordinarily successful investor. That’s easier said than done… but it pays in spades to those able to muster it.

Whether my 10X subscribers have been trading the model for a full 12 months… six months… or one month… all disciplined followers should be sitting on positive returnrns – as high as 105%, for those who joined in March.

And the best part is… I’m confident YOU can position yourself for massive gains like this, too!

As long as you’re resolved to committing to the strategy for the long-run, you can achieve my 10X strategy’s long-term profit potential in the months and years ahead.

Can You Stomach Pot Stocks?

Opportunity: Gold on the Move